(Asian Independent)- India – Sri Lanka relations are rooted in shared history. Geography made both the countries ‘near abroad’ as ‘extended neighborhood’ – Sri Lanka is separated from India by a narrow channel of sea formed by the Palk Strait and the Gulf of Mannar. Both the countries have democratic polity with composite culture and demography with; 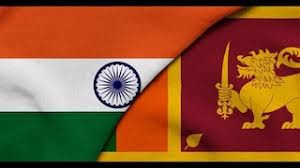 India – Hindus, Muslims, Christians, Sikhs, Buddhists and others and Sri-Lanka – Singhalese (Buddhists), Tamils (Hindus), Christians (both of Singhalese and Dravidian extraction), Muslims (Moors) among others. Both India and Sri Lanka got independence almost together in 1947-48. In spite of shared history and shared values, there have been occasions of concern and worry in the relations of both, since independence from the colonial rule, like unexplainable bitterness or family discord between brothers or friends – India as big with 1350 million and Sri Lanka with only 22 million people as a small a country. Sri Lanka is a small island in the Indian Ocean with a land area of 25,000 square miles. The first matter of concern and worry arose from the Sri Lankan decision to de-franchise some of the Tamil migrants which resulted in ‘stateless’ status for lakhs of Tamil labour force working in the tea estates of Central region of Sri Lanka. It had a direct bearing on the socio-economic scene in the Southern states of India, particularly Tamil Nadu. India being a big neighbor showed magnanimity and agreed to list those ‘stateless’ Tamils and allow them to migrate them to India under the Srimovo-Shastri pact of 1964 signed between PM Sirimavo Bandaranaike and PM Lal Bahadur Shastri. India, as it is obvious and evident, always tried to consider and accommodate Sri Lankan concerns – socio-cultural on one hand and economic-political on the other. But the inimical forces in the periphery; Pakistan and China particularly always remained busy and engaged in fishing in the troubled waters – aspirations of Tamil minority, SAARC issues among others with a view to trouble and contain India. India always stood by Sri Lanka; be it development assistance, help and support in solving the ethnic conflict with Tamils, natural calamities like Tsunami, economic and commercial cooperation etc. In the process, India faced undue hostility and blame too as the internal politics of Sri Lanka needed to oppose the Indian role and motivation particularly with regard to the Tamil issues. India always, as a matter of policy, respected sovereignty and integrity of India while appreciating aspirations of Tamils of Sri Lanka to assuage and addressing the ruffled sentiments of Indian Tamils. 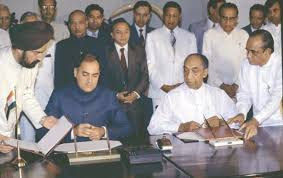 I have shared this narrative not as an expert on Sri Lanka but as a humble functionary of Indian diplomatic machine who had seen some of the happening first hand when I was posted in Kandy, a beautiful hill resort of picturesque Sri Lanka in the latter half of 1980s. The main task of our Mission in Kandy was to implement Srimavo-Shastri Pact of 1964 to register and repatriate so called stateless Indian Tamils in the central region of Sri Lanka; Kandy, Matale, Nuwara Eliya, Badulla, Ratnapura etc. It was a difficult time in the hitherto friendly relations with Sri Lanka. Sinhalese-Tamil hostilities were occupying the peaks of beautiful Sri Lanka. Indian concern and involvement was obvious and perhaps unavoidable – India decided to send humanitarian assistance by boats in the wake of blockade of Jaffna and other northern districts to control the LTTE  by Sri Lanka by armed force – Indian humanitarian gesture was misunderstood and thwarted – India resorted to air-dropping of humanitarian assistance and there was expected hue and cry – we were advised to leave our residences and shift to hotels because of security reasons – PM Rajiv Gandhi visited Colombo and signed agreement with  President J.R. Jayewardene for the deployment of the Indian armed forces – IPKF to control the deteriorating situation in the LTTE controlled areas in the northern region of Sri Lanka – PM Rajiv Gandhi was hit in the head by the butt of a gun in the Guard of Honour by a Sinhalese Sri Lankan soldier (Incidentally, I was an eye witness to this unfortunate happening as a part of the media handling team) – In the wake of curfew and internal violence, we were struck in Colombo for a couple of days –  on our request to the High Commissioner JN Dixit, he arranged our helicopter lift to Kandy with the help of Sri Lankan authorities –  there was a grenade/bomb attack on our office in Kandy by the terrorists in the bee hours of the night – on getting the information, I rushed to our office in my personal car without giving thought to the security considerations. Later, I was advised that I should not have done that as anything could have happened. The rest is history. There are numerous cherished memories of Kandy – The Kandy Lake where I had lessons for my driving license sandwiched by the majestic Dalada Maligawa (Buddha Vihara where the tooth relic of Lord Buddha is enshrined and the Office of the Assistant High Commission of India, the only diplomatic mission in Kandy at that time – Perahera; the annual event in Kandy when the Tooth Relic is taken out in a colourful procession on an elephant; traditionally by Raja, the elephant gifted by PM Jawaharlal Nehru. Raja was declared the national asset by the Sri Lankan Government. Incidentally, when Raja passed away sometimes in 1988-89, it fell on me to represent the High Commissioner and the Government of India to lay wreath on the dead body of Raja at the Dalada Maligawa – The serene and historical Peradeniya University offered heavenly fresh air and academic excellence. It is a matter of satisfaction to note that some of my senior colleagues, who were engaged, hands on, in diplomatic handling of the situation those days in Colombo, are adorning high offices and social status in India, are still around namely; EAM Dr. S. Jai Shankar, Minister Hardip Singh Puri, Ambassador Lakshi Puri among others and are fully engaged in helping Sri Lanka to come out of the current crisis. With this personal background, I come to the current crisis of Sri Lanka and role of India in helping our next door neighbour to overcome these difficulties and be a stable and vibrant partner in development.

Sri Lanka is a beautiful country with enough natural agricultural sources, including tea and spices, to sustain. It is a touristic destination with excellent beaches and green hill resorts with friendly people to man and run the hospitality sector. Sri Lankans has an ‘Island culture’ of fun and frolic. Over the decades, the Tamil issue resulted in racial and ethnic problem. The alleged Sinhalese chauvinism to ill treat the minority Tamils tormented the successive governments and retarded socio-economic development of Sri Lanka. To cut the story short, of late, politically strong family of Gotabaya Rajapakse and his brother Malinda Rajapakse and other siblings succeeded in decimating the LTTE and Tamil rebellion in the Northern districts of the country with a heavy hand militarily in 2009. China, as usual, played a part with their ill designs to lessen the traditional Indian influence and say in the matter as a well meaning neighbour. Sri Lanka fell prey to these machinations. China succeeded, ostensibly, in making Sri Lanka a client state with its policy ‘debt for assets’. Chinese vested interests and ill advised ‘organic farming’ destroyed the ‘self reliance’ for food at the grass roots paralyzed the economy. The Covid pandemic resulted in losses in the tourism sector. The political greed and corruption further aggravated the situation which resulted in unprecedented economic shut down beginning 2019. The main economic sectors of the country – tourism, tea export, apparel, textile, rice production and other agricultural products suffered huge set back. In addition to these economic sectors, overseas employment contributed highly in foreign exchange earnings but dried down because of job losses with 90% of expatriate Sri Lankans residing in Middle East. Both these economic contributors got hit badly and resulted in economic difficulties for the people. The subsequent economic hardships resulted in popular resentment and protests in 2022. PM Mahinda Rajpakse had to leave making way for Ranil Wickremesinghe. Towards the mid-July, 2022 the situation went out of control with protesters entering the Presidential Palace and residence of the PM. President Gotabaya Rajapakkse fled the country to Singapore via Maldives and resigned. The constitutional process to appoint the new President has started would be completed in a week’s time, hopefully.

What is the way out? Political stability with democratic credentials and economic recovery with the help of big neighbours like India is the only answer. Hopefully, the new dispensation in Sri Lanka would understand this. The ground reality is evident. One of the commentators on the Sri Lankan Crisis, Tamanna Salikuddin has rightly said, “The Rajapaksa regime claimed close relations with China but ultimately India was most helpful in the crisis. This year, India has sent over $3.8 billion to Sri Lanka, in the form of currency swaps, loans, food and fuel aid. Even before this week’s acute political disarray, India had pledged a comprehensive plan to increase economic and infrastructure ties between the two nations, a move seen as reassertion of its historic influence in Sri Lanka and as a counter to growing Chinese influence. Other members of the QUAD alliance (the United States, Australia and Japan) have also announced various levels of support for the Sri Lankan economy. Last month at the G-7 Summit, President Biden announced $20 million of additional humanitarian assistance for Sri Lanka, bringing the total U.S. commitments in 2022 for economic and humanitarian assistance to $32 million. It is likely that the United States and other QUAD allies will increase their relief packages for Sri Lankans.”

India has taken a due note of the Si Lankan crisis, obviously and the official spokesperson of the Ministry of External Affairs said, “We are aware of the many challenges that Sri Lanka and its people have been facing, and we have stood with the Sri Lankan people as they have tried to overcome this difficult period.” Maintaining that India is Sri Lanka’s closest neighbour, the MEA said India has extended ‘unprecedented’ support of over $3.8 billion for ‘ameliorating the serious economic situation in Sri Lanka. The spokesman further added, “We continue to follow closely the recent developments in Sri Lanka. India stands with the people of Sri Lanka as they seek to realize their aspirations for prosperity and progress through democratic means and values, established institutions and constitutional framework,”  India cannot afford to be oblivious of the situation in its extended neighborhood. Apart from socio-economic fall out of the unrest in Sri Lanka there are not only security concerns for India but also economic interests. If the current situation in the island nation persists, it could cause a major disruption to the normal functioning of the Colombo Port. This would be detrimental to India’s interest. The port handles over 30 per cent of India’s container traffic and 60 per cent of its trans-shipment.

Let us hope the people of Sri Lanka who have proved themselves a democratic lot in the ongoing crisis would succeed in bringing normalcy back to the beautiful island nation. I fondly cherish the memories of our own living in Kandy, a citadel of Buddhist cultural and spiritual serenity.

Postscript: – “From Colombo, some lesson for South Asia – Nepotism and corruption bring ruin. Closed political systems produce bad policy choices. China’s economic engagement is predatory. Reckless economics will have consequences. And power is fragile.” – An article by Chanakya in the Hindustan Times of July 17, 2022.

Corporate India in Mirror of the Pandemic